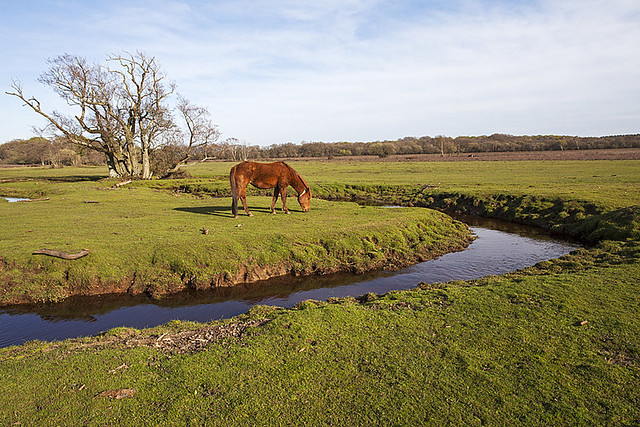 Longwater Lawn itself is in unfavourable declining condition due to works that were undertaken in the late 1960s to artificially straighten the river’s course.

Meanders were blocked off and short stretches of artificial channel were dug to straighten the line of the channel.

This created increased flow rate and erosion along the line of the straightened channel, as well as reducing the habitat diversity of the watercourse as a whole.

A flight pond was created around the same time, and the resulting spoil left in heaps along its northern edge.  These spoil heaps are artificial and have damaged the integrity of the floodplain as a whole.

In Mallard Wood to the west, the river’s course was diverted at an earlier date to flow around the field boundary of Mallard Mead in an artificial channel. This has created a deep, incised channel which is eroding the stream bed.

There are three deep drains in the wet heath around Row Hill, and one across Foxhill Moor. These negatively affect the water table on the wet heath and create potential erosion problems. In addition, their presence in dense heathland vegetation makes them a hazard for stock and humans.

The remnant meanders across the lawn were reconnected to increase the length, habitat diversity and naturalness of the watercourse, as well as reducing stream bed and bank erosion. The stretches of artificial channel were all infilled and the spoil heaps from the flight pond were lowered.

The deep drains in the wet heath around Row Hill were infilled using a combination of existing spoil and heather bales. The deep drain across Foxhill Moor was completely infilled at the top, grading it by partial infill before it emerged onto the lawn at the bottom.

There are a number of discreet passageways and crossings (in addition to the public footbridges) that were maintained to provide access for Commoners, Agisters and Keepers.