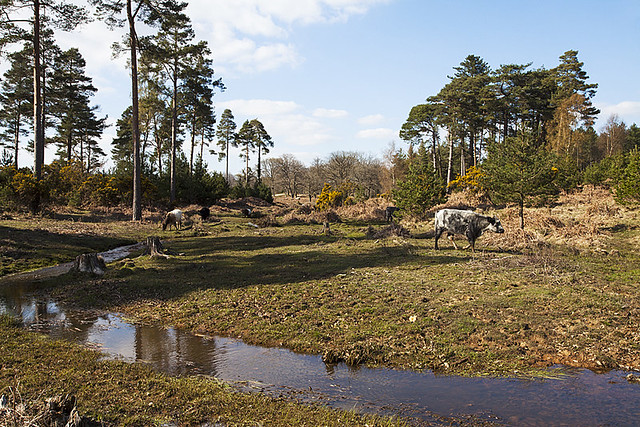 What were the Issues?

This SSSI unit is in unfavourable declining condition due to the effects of artificial drainage in the form of deepened, straightened channels, which in the past has resulted in the loss of significant areas of mire habitat.  In some locations the channel was deeply incised and actively eroding back into earlier restoration work undertaken upstream. Towards the downstream end, the channel is over-widened as a result of the deposition of material washed out from further upstream in the Inclosure.  Whilst some of the side drain watercourses have been restored, the final connections to, and restoration of, the main watercourse running through the Inclosure is required to protect the upstream restoration and prevent ongoing erosion within the stream itself.

Where there were deeply incised channels, there was no seasonal inundation of the mire, grassland and woodland habitats and inconsistent interaction with the floodplain, and the adjacent habitats were negatively affected.

The erosion point below the concrete culvert at the upstream end of the site was replaced with a vented causeway, and the eroded gully infilled.  The gap in the Inclosure boundary bank was widened to improve connectivity and remove a pinch point for flows.Minor nick points in the previously restored stretch of channel were repaired.  From the eroding drop off point of the previous restoration work, remnant meanders either side of the existing watercourse were restored, and the spoil banks levelled, and the artificial drain infilled with hoggin.  Where meanders were not evident, the existing channel was bed levelled raised to link it into the restored bed level of the meanders.

Previous side drain bed level raising works were extended to link in to the restored main channel, and spoil banks were levelled out.

In addition, work was undertaken to maintain and improve pedestrian and rider access.  The bridge at SU23021082 that was removed due to safety issues was replaced with a gravel ford.  The concrete culvert at the track crossroads at SU23131030 had its concrete headwalls removed, and additional plastic pipes were included to make a vented causeway.

The green ride that runs parallel to the watercourse to the east had nine concrete culverts where side drains cross it.  These were replaced with gravel fords.  The access track that runs on the Open Forest along the Inclosure boundary had seven crossings; most eroding, and one concrete culvert.  All the ford crossings and any up or downstream erosion was repaired, with vented causeways installed at two locations to replace the heavily eroded ford and a concrete culvert.

To download the planning application, visit www.newforestnpa.gov.uk/planningapplications and type in application number 14/00394