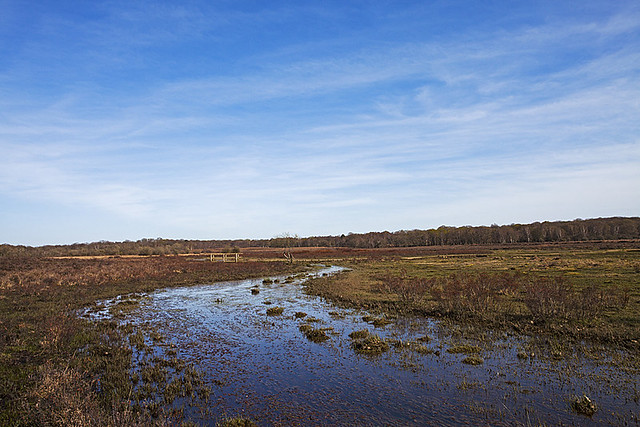 This SSSI unit is in unfavourable declining condition due to the effects of artificial drainage, which is causing increased erosion of the river bed and limited channel habitat diversity, as well as limited seasonal inundation of the surrounding grassland, heathland, mire and woodland habitats and inconsistent interaction with the floodplain, with the effect that these adjacent habitats are negatively affected.

The remedy identified to achieve favourable condition was to restore, where evident, the original meandering course of the Shepton Water as it flows through Penny Moor, and infill the redundant drain.

Across part of the lawn, a compromise was agreed with stakeholders to maintain a narrower drain channel, to keep the lawn habitat to the south separate from the mire to the north. After Rowbarrow Pond, the meandering stream course through Alder Carr up to the footbridge was restored, and the redundant drain channel infilled.

A footbridge and a culvert crossing that was affected by the works at this site were maintained for operational and public access.

Part of the scheme was suspended temporarily in 2012 when a community of rare plants was discovered in one of the existing drains. A new scheme has been devised for this section which will maintain slow-moving water in this vegetated drain, while the majority of the flow is diverted through a restored meander route to the north.