Past drainage work in Soldiers Bog had resulted in a more rapid flow of water from the mire. The erosive force of the water was also affecting the integrity of earlier restoration work downstream in North Oakley Inclosure, where the watercourse joins Blackensford Brook.

The restoration work on Blackensford Brook was carried out in 2004 as part of the Life III project but some areas were becoming unstable. Without full restoration of the watercourses upstream, the work within the Inclosure would continue to be destabilised.

How did we fix it?

Starting upstream at Soldiers Bog, we raised the bed level of the deeply incised artificial drain in the mire. From the point where the mire becomes a stream, a shallow meandering channel was restored where former meanders were still visible on the ground. We then raised the bed level of the existing channel for the final stretch, as far as the gravel ford on Blackensford Brook within the Inclosure. 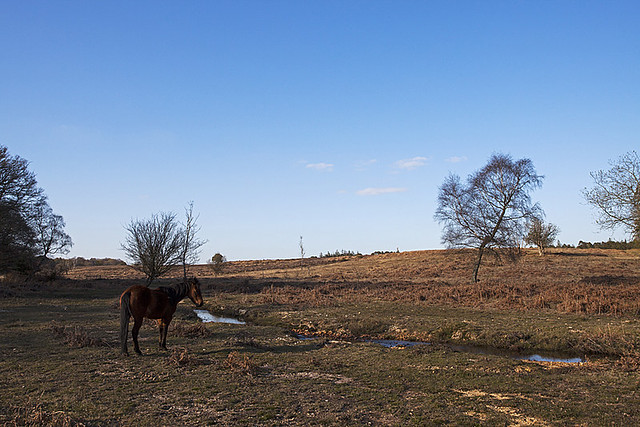 As part of the works, we relocated the wooden footbridge on the track leading from Sandy Ridge to Stinking Edge Wood. The two vehicle fords – one beside the Inclosure fenceline on the Open Forest and the other at the downstream end of the site in the Inclosure – were maintained and the bed levels will be raised accordingly.

We repaired a short stretch of localised erosion on a second watercourse which arises in the west at Blackensford Bottom. Access across the small footbridge in this location was not affected.

NB: The restoration work that took place on this site was largely on the Open Forest, and was therefore be funded by HLS. The bed level raising within North Oakley Inclosure was paid for by the Forestry Commission’s core funding budget.